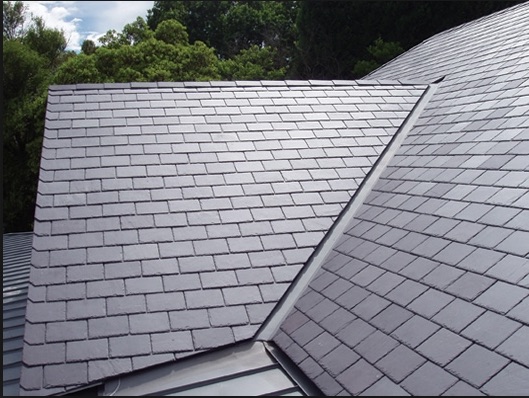 If you’re thinking about getting a slate roof for your house or replacing your existing roof with a brand new slate roof, read on to find out about the then following are some very positive aesthetic and natural attributes of slate roofs.

Like most people, they have seen slate roofs when driving around Sydney but have probably never handled a slate roof tile or know that that it comes in a variety of colours. One such slate tile is known as Welsh Slate and it’s famous worldwide for it’s colour options as well as its overall smooth sheen. This is the result of millions of years of compression. Mother nature has delivered to you a stunning looking material that’s going to make a huge difference to the look and appearance of your roof.

The slate colours are all named after the quarries where they are found, Penrhyn Heather Blue, Penrhyn Heather Red and Cwt-y-Bugail Dark Blue Grey are all famous examples of slate colour and this can make a huge difference the finished look of your roof. Make sure you ask the team at First Class Slate about these colours and get some samples.

Slate begins its life as muddy silt which over millions of years of pressure and compression allows it to slowly form into a structure that allow them to be separated into sheets by ‘cleaving’ the rock. Over time and we are talking a very long time, these tightly packed minerals combine to form slate which water simply cannot penetrate. It can be raining for weeks or months non-stop but this will have zero impact on a slate roofs water penetration – it will not seep through. It will remain completely watertight even through the very worst Sydney storms and downpours. This is the beauty of slate!

If you have a wooden shingle roof, which is very common throughout Sydney, you should be aware of its flammable properties. Slate roofs on the other hand are totally fire resistant and its natural properties means that it can survive bushfires as well as urban fires that may spread from house to house. Tests have been conducted where slate roofs have withstood fires and there has been absolutely no warping or cracking when exposed to rigorous heat or fires. The natural properties of slate tiles should give you real peace of mind in terms of helping protect your house and possessions against the ravages of fires.

Slate might be just that bit more expensive but it has tremendous longevity and will probably out live you. Slate tiles will essentially last an eternity and if there are any issues with wear and tear and you do need some slate rood restoration done, it’s probably due to the roof structure and not the tile itself. Wooden and steel roofs will need replacing but one things for certain, your slate roof will be around for decades.

If you are thinking more seriously about getting a slate roof or would like to know more, don’t hesitate to contact the team at First Class Slate for an obligation free discussion or quote.